My Son Holy Land, which is located in a quiet valley measuring about 2km in diameter in Duy Phú Commune, Duy Xuyen District and surrounded by mountains, is a Hindu holy land of the Champa Kingdom. The site is about 20km southwest away from Tra Kieu Ancient Citadel and nearly 70km southwest from Đà Nẵng City. From what was written on the oldest stele that dates back to the 4th century in My Son, King Bhadresvara had a temple built in honor of King Bhadravarman, the first emperor in Amaravati in the late 4th century, and who was identified as Siva deity. Champa people worshipped deities, the king, and royal ancestors. 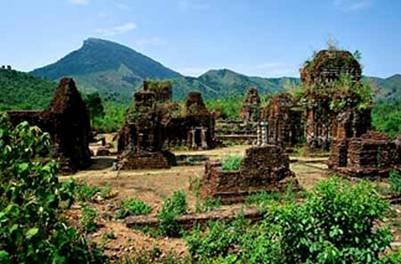 With over seventy brick and stone architectures built between the 7th century and 13th century, My Son became the most important architectural centre of the Champa Kingdom. When My Son was discovered in the late 19th century and researched in the early 20th century, there were 68 remaining architectures. The site was restored by E.F.E.O (Ecole Française d’Extrême Orient) from 1937 to 1944. However, during the fierce wars, especially in 1969, only 32 relics remained, including about 20 temples and towers, according to the statistics of 1975. 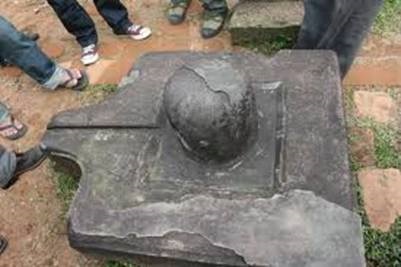 From 1981 to 1991, My Son was preserved and renovated partly with the professional help of Polish company P.K.Z. At the 23rd session of the World Heritage Committee held in Marrakesh (Morocco) from November 29th to December 4th1999, My Son relic site was recognized as a world heritage by the UNESCO basing on standard C (II) as a typical example of cultural exchanges, and standard C (III) as the only proof of the vanished Asian civilization.

Located in an area that is the present Central Vietnam, Champa Kingdom was known as an independent nation that existed continuously from 192 to 1832 with the names of Lâm Ấp (192-757), Hoàn Vương (757-875), Chiêm Thành (875-1471), and Panduranga – Champa (1471-1832). The collapse of the kingdom led to the gradual vanishing of unique architectures, such as My Son Holy Land, Shimhapura Citadel (in Trà Kiệu), Indrapura Capital (in Đồng Dương), Vijapura Capital (in Phan Rang), etc. Not until 1885, when M.C Paris, a French scholar, discovered My Son relic site did French scientists started investigating the history of Champa Kingdom. Over ten years later, researchers studied this relic site. From 1898 to 1899, Louis Finot and Launet de Lajonquere studied the steles. In 1901 and 1902, architect and archaeologist Henri Parmentier studied Champa architecture and sculpture. In 1904, he and Olrpeaus carried out an excavation at My Son. Basic information about the steles and architectural style of My Son was officially declared by L. Finot and H. Parmentier in the same year. The researches of H. Parmentier showed that there are up to 68 architectures left in My Son, and he himself classified them into groups ranging from A, A’ to N. 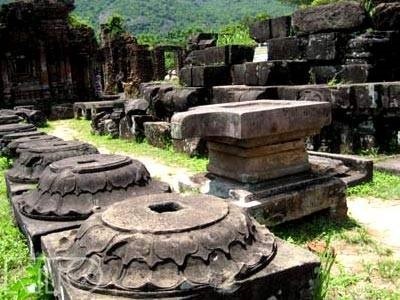 By comparing the relics, including remaining and destroyed temples, towers, the texts written in the Champa and Sanskrit languages, Vietnamese and Chinese history and related diplomatic documents, scientists have step by step figured out the history of Champa Kingdom. It’s likely that Champa was not a central governed political institution but was a loose federation comprised of many small self-governed nations that could easily separate as independent nations. Champa Kingdom was home to Champa ethnic group, which accounted for the majority of the kingdom’s population, and several minority groups in the mountainous areas of Tây nguyên. The Champa ethnic group consisted of two tribes – Kramuta Vanusa and Naeikela Vanusa. Despite their alliance with each other, these tribes never ceased to compete with each other for the leadership of the kingdom. 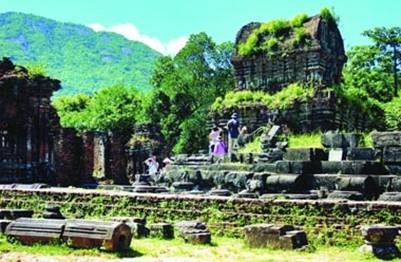 MY SON – A TREASURE FROM THE PAST

During the time of constructing the kingdom, Champa culture was strongly influenced by Indian culture. Right from the early years of the Christian era, Champa people had breen using Sanskrit, making Champa the first country in Southeast Asia to have a writing system. From basic Sanskrit, they removed the consonants absent in Champa language and added some new symbols to form Champa Sanskrit. Champa language consisted of 65 symbols and 24 characters originating from India’s Akhar Thrah writing system. The writing style on Võ Cạnh stele in the 3rd century is similar to that on the stela in Amaravati in Northern India. During over ten centuries of existence, Champa writing had changed corresponding with different periods and influential regions of South India. For example, from the 6th to 8th centuries, Champa writing was square like Northern India writing, and from the 9th century onwards, it was round like Southern India writing. 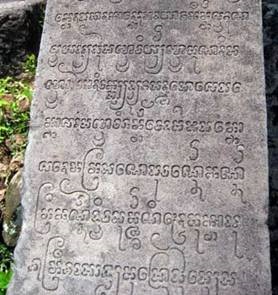 According to My Son stela, the prime foundation of the architectural complex was a wooden temple built in the 4th century to worship deceased kings and deity Siva – Bhadravarman. After over 200 years of existence, it was burn down in a fire and was rebuilt with solid materials by King Sambhuvarman and has existed till today. During many centuries, Champa people had set up a unique architectural complex built from baked materials and sandstone, making it the centre of culture and religion of Champa dynasties. In addition to the main temple where Linga-Yoni, symbol of creativity, was worshipped, there are a main temple called Kalan and many sub-towers worhipping deities, deceased kings and veteran bonzes. 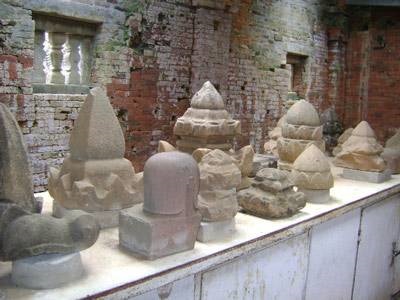 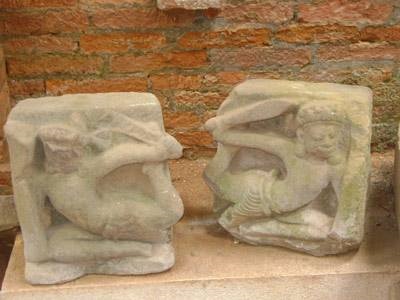 The tower-temples in My Son were all built on a quadrangular foundation and consisted of three parts: The base is solidly built, representing the world of human beings, the body represents the world of spirits, and the top depicts communication activities, such as a man offering fruits, images of birds, and mammals (elephant, lion, etc), familiar symbols to human life and religion. 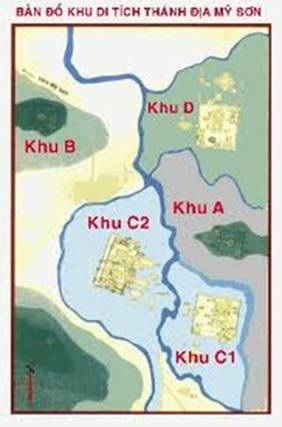 There are two hills facing each other at My Son Holy Land, one in the east and the other in the west. The stream branches become the natural boundaries that divide My Son Holy Land into four areas of A, B, C and D. This way of division suits fengshui and avoids separating the general architecture as what H. Parmentier did in 1904. 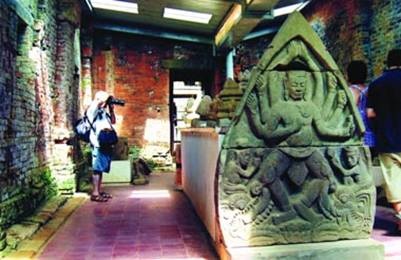 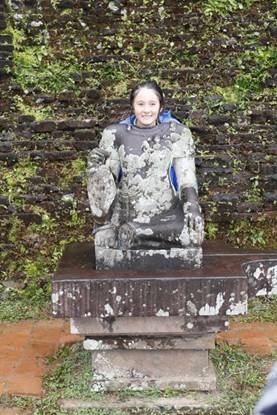 On October 26th 2005, the Archaeological Insitute and Quảng Nam Centre of Heritage and Vestige Preservation amazed scientists by announcing a great archaeological discovery – Under the ground of My Son relic site is another site. According to Dr. Lê Đình Phụng, conductor of an excavation group of Vietnam Institute of Archaeology, at the depth of 0.9m to 2.3m under the ground of the tower site D, at the holes H1, H2 and H3, the archaeologists found out the remnants of works not related to the current My Son architecture. These architectures include collapsed temples and towers, with brick and stone walls, posts, and decorative blocks that date back to the early 10th century. The excavation group also discovered over 445 artefacts from a stone tower that date back to the 13th century. Though the discovered artifacts aren’t as old as many known ones, they provide scientists with more knowledge about the architectures that have become cultural heritages of human being, and help them discover the glorious culture of an ethnic community in Vietnam. 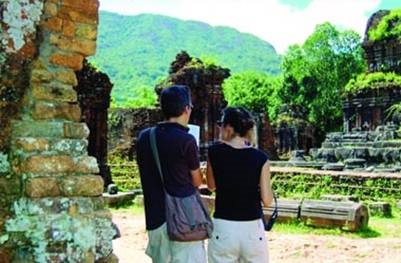 Today, many typical artifacts discovered at the area of ancient towers, such as the statues of deities worshipped by Champa people, worship objects, statues of female dancers and the paintings that depict community activitíes, are being displayed at some Vietnamese and international museums, mainly at Đà Nẵng Museum of Champa Architecture. Although these priceless sculptural works haven’t been introduced in large numbers, they are the proofs of an outstanding culture. 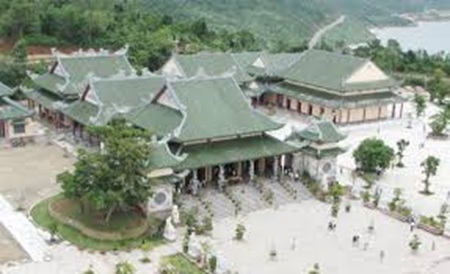 Located on the Son Tra peninsula, 10 km northeast of Da Nang city, Linh Ung pagoda, with its famous architecture is worth visiting. Linh Ung literally means “wishes answered miraculously”. At nearly 200m above sea level, this 20 hectare pagoda offers a magnificent view of the sea and the city of Da Nang. Venerable Thich Thien Nguyen, the pagoda’s manager says that in the reign of King Minh Mang, local fishermen discovered a statue of the Buddhist Goddess of Mercy on the beach. After that, a temple dedicated to the goddess was built on the site. Since then, local residents have enjoyed peaceful and prosperous lives. During the anti-American war, the Buddha statue and pagoda were almost totally destroyed. It was not until 2004 that the Venerable Thich Thien Nguyen mobilized donations from Buddhist followers from near and far to rebuild the pagoda. 6 years later, the construction of the pagoda was completed. Linh Ung pagoda is now a symbol of the rise of Buddhism in VN in the 21st century. Venerable Thich Thien Nguyen talked to us about the name of the beach- Bai But- on which the pagoda was built: “Bai means beach, and But means Buddha. Anyone who has an accident or is shipwrecked in the waters nearby will be saved if they drift to this beach”.

When you cross the threshold of Ling Ung pagoda, it is like entering a fairytale. In the courtyard are 18 Arhat statues that represent different emotions such as love, hate, happiness, and anger. This is also a venue for local craftsmen to show off their talents in carving marble statues. These statues contribute to the architectural uniqueness of Linh Ung pagoda. Ha Minh Quang, a tourist from Hanoi, says: “This is the first time we’ve come here. This pagoda is the most sacred. It is surrounded by a beautiful landscape, mountain and sea. It’s very romantic. The atmosphere is peaceful. From a distance, we can see the statues. I have never seen a statue as beautiful as this one. 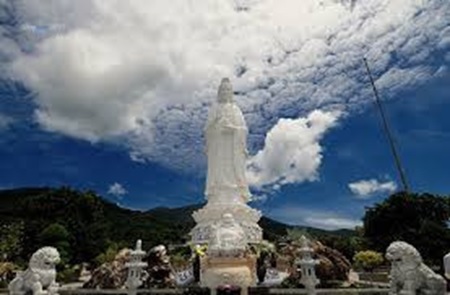 What strikes visitors to Linh Ung pagoda most is the Guanyin statue. The 67-m statue is the tallest in Southeast Asia. The Statue leans on the mountain and looks toward the sea. Guanyin wears a hat that is nothing but a Buddha statue 2m high, which has 17 floors, each housing 21 tiny Buddha statues with different shapes and facial expressions. The omnipresence of the Buddha and the peaceful atmosphere provide the serenity pilgrims seek. Nguyen Thi Phuong, a resident of Da Nang, says: “I come here to pray on the 1st and 15th day of every lunar month. I feel very relaxed. I also just enjoy the scenery”.

At night, the statue is illuminated. It radiates like a light house beacon into the sea, guiding the fishermen in storms. Huynh Van To, a fisherman from Quan Tho district, Da Nang, says: “For me, Guanyin is sacred. When we go fishing, our mind turns toward her and we always pray to her for good catches. She watches over us”. 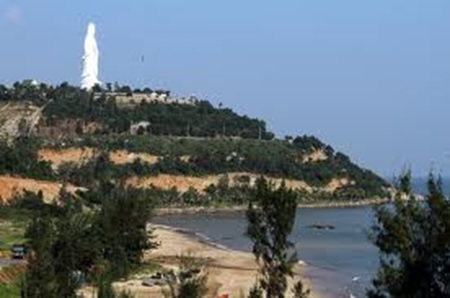 If Linh Ung Pagoda is the most beautiful and sacred pagoda in Vietnam, Buddha beach is the most beautiful beach on Son Tra peninsula. It is a must-see for lovers of ecological tours. Da Nang is popular tourist destination that satisfies your spiritual yearnings in an exceptionally natural setting.